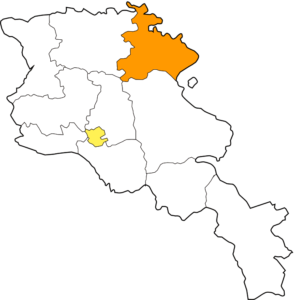 Tavush has an area of 2,704 km² (9% of total area of Armenia). It occupies the northeastern part of Armenia. It is bordered by Georgia from the north and Azerbaijan from the east. Domestically, it is bordered by the Gegharkunik Province from the south, Kotayk Province from the southwest and Lori Province from west. The territory is mainly mountainous and rocky hillsides covered with a green carpet of Alpine meadows. About 40% of the territory is covered by forests. This is how it is the most forrested region of Armenia.  The average height of the region is around 900 meters above sea level.

The province is a major source of water in Armenia. The main source is Aghstev river with its tributaries Getik, Voskepar and Sarnajur. Minor rivers include Akhum, Tavush and Khndzorut.

Tavush is also rich for its mountain springs, mineral water and small lakes such as the Lake Parz and Lake Gosh.

Most of the Tavush territory is covered with thick forests, mainly around the towns of Dilijan, Ijevan and Berd. The province has a number of protected forests including the Dilijan National Park, Akhnabad Taxus Grove Sanctuary, Arjatkhelni Hazel Sanctuary, Gandzakar Sanctuary, Ijevan Sanctuary and Zikatar Sanctuary.

The present-day territory of the Tavush region largely corresponds to the historical Utik. It was part of Artashesian, Arshakunyats and Bagratunyats (Kingdom of Lori) Armenia.